SECT: No Echo Debuts “Day For Night” Video From Southern Lord-Bound No Cure For Death LP 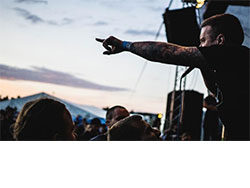 SECT – founded by members of Cursed, Left For Dead, Catharsis, Undying, Earth Crisis, The Path Of Resistance, Day Of Suffering, Racetraitor, and more — has issued an official video created for the song “Day For Night,” which hails from the band’s impending second album, No Cure For Death, set for release later this month through Southern Lord.

No Echo has debuted the new video, which was directed by Justin Reich (Black Label Society, Crowbar, Hatebreed) alongside an interview with guitarist Scott Crouse, offering in part, “the video is an all-action affair that captures the intensity of both the band’s performance style and the song at hand… the song sounds both massive and mean as fuck.”

See footage of the No Cure For Death recording sessions at THIS LOCATION and stream the track “Open Grave” HERE.