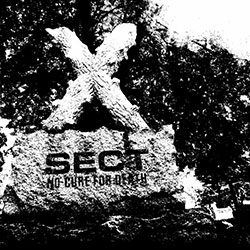 SECT shares the caustic, riotous “Stripes” through a premiere at Punktastic. The track is taken from their second album, No Cure For Death, due out through Southern Lord next Friday, November 24th. Fueled by socio-political vitriol, for SECT, the purpose of hardcore as they know it is to convey an urgency that transcends age, credentials or scene politics, to convert desperation into real talk and action.

Vocalist Chris Colohan explains the thinking behind this particular track “‘Stripes’ is about the prison industrial complex in overdrive and the political and penal system keeping it stocked compensating economically for the abolition of slavery, and undercutting the gains of the civil rights movement. Essentially, de facto enslavement that aims to recreate and maintain the same original racial and pecking order with the same scapegoats and victims of not just decades but centuries ago that the West was built on. It’s an ugly reminder in the age of the overt white supremacist resurgence and the struggle against it that we’ve never yet gotten beyond that underlying foundation.”

“the metallic hardcore is filthy and sinister, laden with a guitar tone resembling a power tool and with feedback akin to the noise one would make scraping on steel.” – Exclaim!

“the video is an all-action affair that captures the intensity of both the band’s performance style and the song at hand… the song sounds both massive and mean.” – No Echo

“The album was produced by Converge’s Kurt Ballou, so you should know what it’s going to sound like already – total fucking Armageddon.” – Metal Injection