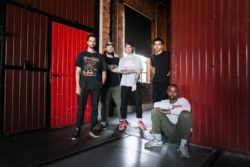 Just days ahead of the Southern Lord release of Only Self, the anxiously awaited debut LP from Philadelphia’s metallic hardcore outfit, JESUS PIECE, Revolver Magazine is hosting an exclusive early stream of the entire album.

JESUS PIECE is quickly developing a reputation as one of the heaviest, most uncompromising acts both on record and on the stage. With the brutalizing grooves of Disembodied, Turmoil, Harm’s Way, and labelmates Xibalba, the band incorporates elements of noise, ominous tones, and haunting atmospheres into their dynamic songwriting. With crushing, modern production, the eleven new tracks on their Only Self debut LP place JESUS PIECE among the scene’s darkest and heaviest acts and delivers one of the most anxiously-awaited albums of the hardcore/metal underground this year with Only Self, a record which proves itself as one of the year’s most vicious releases.
Only Self was recorded in Chicago at Bricktop Recording Studio with Andy Nelson (Weekend Nachos, Like Rats, Dead In The Dirt) mastered by Brad Boatright at Audiosiege (Integrity, Nails, Xibalba), and completed with artwork by Dom Pabon.
Revolver notes of Only Self, “Through clenched teeth, vocalist Aaron Heard sounds like an unhinged animal, ferociously tearing through drop tuning, d-beats, blasts and exaggerated breakdowns to create the ideal pied piper to lead us all down this path of hate and frustration.
Musically, JESUS PIECEborrows from a thousand different sources in their approach, avoiding many of the modern tropes and sticking to influences like Buried Alive, Disembodied, Craft, Nasum, Cursed, doom metal, and more in their hateful approach to the genre.”
Hear JESUS PIECE tear a hole in the sky; stream Only Self at Revolver Magazine RIGHT HERE.
Southern Lord will release Only Self on CD, LP, and digital formats this Friday, August 24th. Find physical preorder options at the label shop HERE and digital at Bandcamp HERE, iTunes HERE, and through all other digital providers.
JESUS PIECE has toured mercilessly alongside Darkest Hour, Comeback Kid, Burn, Knocked Loose, Terror, Vein, Year Of The Knife, and many more across North America and Europe over the past year, and just made their vicious return to This Is Hardcore. The band has confirmed a hometown release show for the LP, this Sunday, August 26th with Horror Show and more. Watch for new tour dates forJESUS PIECE to continually to be announced throughout the year in support of Only Self.
JESUS PIECE:
8/30/2018 Ortlieb’s – Philadelphia, PA *Only Self release show w/ Horror Show, Raw Force [info]
A band which works tirelessly to play to everyone they can, the anthems of JESUS PIECE tackle topics of personal struggle and loss, to socio-political matters including racism, police brutality, and other injustices. The band formed in 2015 and self-released their first demo/EP in the same year, followed by a self-released EP in the Summer of 2016. Bridge Nine Records released a split 7″ between JESUS PIECE and Malice At The Palace in early 2017. The band has paved their own way into the national scene by booking multiple headlining coast-to-coast tours among many bouts of regional touring and performances at notable festivals including This Is Hardcore, Nature World Fest, Sound And Fury, FYA Fest, and others.
For review copies of Only Self and interviews/coverage of JESUS PIECE in The Americas contact dave@earsplitcompound.com and internationally contact lauren@rarelyunable.com.
https://twitter.com/jesuspiecehc
https://www.instagram.com/jesuspiecehc
https://jesuspiecehc.bandcamp.com
http://www.southernlord.com
http://southernlord.bandcamp.com
http://twitter.com/twatterlord
https://www.facebook.com/SLadmin