EXCEL Issues Remastered The Joke’s On You Via Southern Lord; Album Streaming At New Noise + Release Show Added To The Power Of The Riff 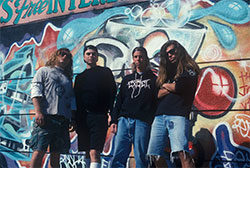 Originally released via Caroline Records, and produced by Randy Burns (Megadeth, Kreator, Possessed), The Joke’s On You is EXCEL’s second full-length, which saw wide acclaim from thrash, punk, metal, and skate rock circles, as members have been known to share ramps with pros Christian Hosoi, Eric Dressen, and Tony Alva, and others. Drawing influence from a diverse range of artists including Black Sabbath, Black Flag, Jimi Hendrix, and early Corrosion Of Conformity, people often talk of “crossover” acts, but none quite do it as exceptionally well as EXCEL

Following Southern Lord’s reissue of EXCEL’s Split Image debut LP in 2014, the label’s reissue of The Joke’s On You was remastered by Brad Boatright at Audiosiege (Poison Idea, Integrity, Nails). The new version contains the twelve tracks on the original CD edition, including the track “Blaze Some Hate” — initially released as a 12″ single via Caroline, not the original release of the LP.

Stream EXCEL’s revamped The Joke’s On You at New Noise Magazine HERE.

The Joke’s On You is available through EXCEL’s Southern Lord webstore RIGHT HERE.

In celebration of the re-release of The Joke’s On You into the masses, EXCEL will play a special release show for the reissue, at a special pre-party for The Power Of The Riff in Los Angeles in December. The newly-confirmed show sees EXCEL joined by Death Crux and another act to be confirmed, playing at The Complex on Friday, December 16th, followed by the main TPOTR events taking place the following two nights.

Formed in 1984 from the remains of Los Angeles hardcore band Chaotic Noise, EXCEL caught wide attention of the masses with the release of their Personal Onslaught demo (1985). Fellow Californian thrash crossover influencers, Suicidal Tendencies, accelerated EXCEL into wide acclaim with frontman Mike Muir’s inclusion of them on his Welcome To Venice compilation (1985) and releasing EXCEL’s Split Image debut LP on the Suicidal Records imprint. Sold out tours and further successful releases soon followed, all which stomped over various sonic terrains whilst always spreading a punk attitude and a harbored love for heavy metal.