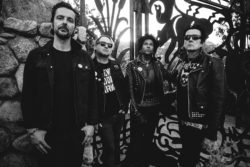 Influenced by the likes of Killing Joke and 1919, THE WRAITH‘s post-apocalyptic “Wing Of Night” juxtaposes a relentless verse groove – the ominous march of a spiritual death squad – with faint hope flickering amidst its expansive chorus.

“‘Wing Of Night’ is about not just surviving the pain and struggle of living in a dark world, but also welcoming these,” says THE WRAITH vocalist/lyricist Davey Bales. He continues, “Embracing hell and rejecting heaven as your reality, but in a positive way.”

Stream THE WRAITH’s “Wing Of Night” at Bandcamp RIGHT HERE.
Gloom Ballet will be released worldwide via Southern Lord on November 29th. Find preorders at the label webshop HERE and Bandcamp HERE.