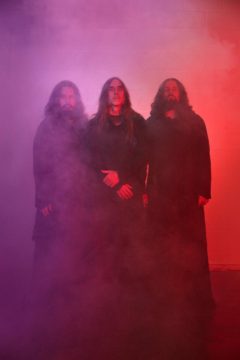 SUNN O))) releases their first new album in four years, the Steve Albini-engineered Life Metal, through Southern Lord as part of Record Store Day tomorrow, Saturday, April 13th. This special release of the album sees Life Metal as one of the official and highlighted RSD titles (#RSD19), and lets fans purchase the album one week before the label and band direct version of the record is available, and two weeks ahead of the album’s official retail release. See the RSD unboxing video for Life Metal HERE.

Tomorrow is also the Brooklyn-based listening session for Life Metal, set to take place at Future Space in collaboration with Southern Lord and The Tinnitus Music Series. The experience will feature a tower of loudspeakers, engulfing walls of fog and color. A congregation of guests are invited to explore the entire album, which is being played in its entirety at maximum volume. This event is free, public event on a first come, first serve basis. RSVP HERE.

Life Metal will be supported by SUNN O)))‘s first US tour since 2017. Beginning next Wednesday, April 17th in Cleveland, the tour will run through Detroit, Chicago, Pelham, a return to Chicago by demand, Philadelphia, New York City, New Haven, and Pittsburgh before the final show in Washington on April 28th. Support for all shows will be provided by Papa M, with David Pajo (Slint, Interpol).

SUNN O))) has also announced a run of UK tour dates for the fall, running from October 24th through 28th, with additional European performances to be announced.

SUNN O))) co-founders Stephen O’Malley and Greg Anderson set out on a path toward a new album production for Life Metal. Following pre-production sessions as a trio with T.O.S. on Moog at Dave Grohl’s 606 Studios in Northridge, California, in July 2018, SUNN O))) spent just over two weeks in Chicago at Electrical Audio (Studio A) with Albini at the helm. The album was mastered and the lacquers cut from tape in October by SUNN O))) ally Matt Colton at Alchemy in London. The LP version is a AAA album, recorded and mixed on tape via a completely analogue production, from the input of the band’s amplifiers and the air coming off the speakers in front of the microphones to needle touching the pressed vinyl on your turntable.

Review copies of Life Metal will be issued in the coming days. For coverage of SUNN O))) in The Americas contact dave@earsplitcompound.com, all others contact lauren@rarelyunable.com.