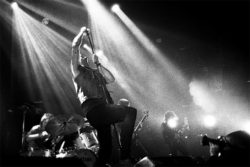 La Ilden Lyse – which roughly translates to “Keep The Fire Burning” – is an album of pure, cold, grim, rawness. Themes of enduring life, transcending death, worshipping the moon, and triumphant, satanic darkness are all at play here, and the album sounds harder, faster, and nastier than ever. No more messing around. Keep it black, keep it metal, all the time.

BrooklynVegan writes, “Four years is the longest OKKULTOKRATI have gone without an album, and it seems like the time away has only made them sound more furious. La Ilden Lyse tones down the gloomy post-punk/deathrock side of the band’s earlier work, and finds them diving more head-first into their Discharge side. As usual, they combine the punk influences with the harsh vocals and atmospheric rawness of early black metal and the metallic rock and roll of bands like Motorhead and Venom, so La Ilden Lyse is still in the same general ballpark as OKKULTOKRATI‘s other albums; it’s just even nastier.”

La Ilden Lyse will see release through all digital providers this Friday, May 15th including Bandcamp HERE. LP/physical bundles are now shipping from the Southern Lord Euro store HERE and US physical preorders launch on June 5th.

OKKULTOKRATI offers on the release of La Ilden Lyse, “Behind the veil of the mundane world there is fire, darkness and the old gods. Beyond space and time there is an essence of nature, existence and madness. Life is constant struggle, endurance and pain, and if it doesn’t break your spirit then you are forged stronger in the flames. Infernal hellscapes, hidden realms and a glimpse into the void, all while spitting in the face of adversity.

La Ilden Lyse is triumphant, tyrannical and transgressive music to inspire, anger and fuel the fires of pitch-black souls.

Review copies of La Ilden Lyse and interviews with OKKULTOKRATI are now available. For coverage in North and South America contact dave@earsplitcompound.com and internationally contact lauren@rarelyunable.com.