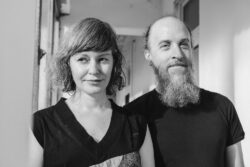 Nadja share special video footage recorded at The Black Lodge in Berlin, which originally premiered exclusively for Roadburn Redux last Friday – now available to view here. About this new material, Nadja comments: “Early in 2021, the Black Lodge and Salon Oblique invited us to participate in their series of filmed performances by Berlin artists. For this session, we chose to perform a new composition, Seemannsgarn, an extended, meditative piece we wrote about a liminal and tranquil green space/urban waterway in our quiet corner of Berlin, now in flux and with an uncertain future, threatened by gentrification and development.”

This standalone piece does not appear on their forthcoming album Luminous Rot, which shall be released on CD and DL formats via Southern Lord on May 21st, with the LP version arriving on August 13th. Pre-order information incoming soon.

On the new album, Nadja have refined their signature sound which combines the atmospheric textures of shoegaze and ambient/electronic music with the heaviness, density, and volume of metal, noise, and industrial. The duo retain their overblown/ambient sound, and explore shorter and more tightly structured songs reflecting their interests not only in metal, but post-punk, cold-wave, shoegaze, and industrial.

Thematically, the album explores ideas of ‘first contact’ and the difficulties of recognising alien intelligence. This was in part inspired by reading such writers as Stanislaw Lem and Cixin Lui — in particular, theories on astro-physics, multi-dimensionality, and spatial geometry in “The Three Body Problem” — as well as Margaret Wertheim’s “A Field Guide To Hyperbolic Space,” about mathematician Daina Taimina’s work with crochet to illustrate hyperbolic space and geometry.

The album was recorded between their home studio, Broken Spine Studios, or Nadja’s live rehearsal studio, both in the district of Lichtenberg, Berlin.

Luminous Rot marks the first album mixed by someone else, who in this case was David Pajo. The band comment, “as big fans of Slint, we thought he might fore-front the more angular, post-punk elements of our music – the mix is quite different from our previous albums. But, as usual, we had James Plotkin (Khanate, OLD, etc) master the album as we trust his ears and aesthetic, as he’s mastered numerous records of ours.”

The duo has toured extensively around the world—including performances at such festivals as SXSW, FIMAV, Roadburn, Donaufest, Le Guess Who, Incubate, and Unsound—and sharing stages with the likes of Earth, OM, Khanate, Tim Hecker, Ben Frost, and Godflesh.

Originally from Toronto, Canada, for the last decade the duo has been based in Berlin, Germany.