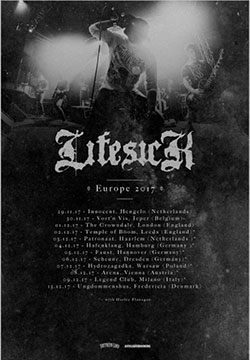 Danish metallic hardcore outfit LIFESICK has announced a European tour which begins next week and runs through mid-December, providing support for Harley Flanagan on most the shows.

LIFESICK is an overwhelmingly hard-hitting act who integrates elements of morbid, extreme metal into aggressive, mosh-primed hardcore. The band is currently in Dead Rat studio recording their follow up to 6.0.1 which was released in November 2016 on LP format via Southern Lord, and prior to that on CD format via FWH Records.

LIFESICK twists the clobbering sounds of bands like Merauder, Xibalba, and Nails, combined with the northern European climate: harsh, cold, and steeped in metal history. Between brutal breakdowns and direct, forceful vocals, the young Danes make their mark with evil melodies that ooze black and death metal vibes, all delivered in the crushing tone of the HM-2.

For coverage of all things Southern Lord in North America contact dave@earsplitcompound.com and in Europe contact lauren@rarelyunable.com