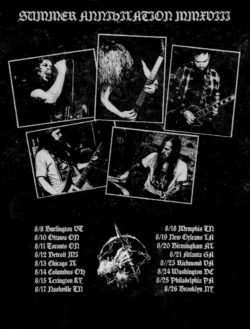 Worcester, Massachusetts crossover outfit HIGH COMMAND is out on the Summer Annihilation MMXVIII Tour across the Eastern US and Canada this week. The band is working on their debut LP which is set for release through Southern Lord upon its completion.
Surging with the strength of the early US thrash and crossover scene, HIGH COMMAND projects a scathing display of scorched earth vocals and spiraling divebomb riffs, soaked in napalm leads, and percussive devastation. With competitive and fantasy-inspired lyrical scourge, the band drives their message forth with might and conviction. The raw barbarity of HIGH COMMAND‘s crushing early recordings caught the ear of Southern Lord who hunted the band down and now has them locked and loaded for the release of their debut LP. Writing for the new record commenced in the autumn of 2017, and the album will be completed in the coming months and released by early 2019. Stand by for further missives on the band’s impending aural assault.
HIGH COMMAND is storming across the North American continent on the Summer Annihilation MMXVIII, with two shows in Ontario this week before they cross back into the Midwest US and crush south into the Southeastern states and back up the East Coast, the final show hitting Brooklyn on August 26th.
Watch for additional tour dates and more info on their debut album to be issued over the months ahead.
HIGH COMMAND Summer Annihilation MMXVIII:
8/10/2018 The Dom – Ottawa, ON8/11/2018 Coalition – Toronto, ON8/12/2018 The Fireside Inn, Detroit MI8/13/2018 Chi Town Futbol – Chicago, IL8/14/2018 Spacebar – Columbus, OH8/15/2018 Best Friends Bar – Lexington, KY8/17/2018 Radio Café – Nashville, TN8/18/2018 Rock House Live – Memphis, TN8/19/2018 Santos Bar – New Orleans, LA8/20/2018 Firehouse – Birmingham, AL8/21/2018 529 Bar – Atlanta, GA8/23/2018 Strange Matter – Richmond, VA8/24/2018 The Pinch – Washington, DC8/25/2018 Lava Space – Philadelphia, PA8/26/2018 St Vitus Bar – Brooklyn, NY
The brainchild of guitarist Ryan McArdle and vocalist Kevin Fitzgerald, HIGH COMMAND began in rebellion to the brutal winter months, yet quickly spiraled into a full-bore killing machine, initiating the recruitment of like-minded area friends, the lineup fleshed-out by guitarist Mike Bonetti, bassist Chris Berg, and drummer Ryan Pitz. The bandrecorded The Secartha Demos at The Paincave with Chris Corey (Mind Eraser, Magic Circle, No Tolerance, Innumerable Forms) and had it mastered by Brad Boatright at Audiosiege (From Ashes Rise, Integrity, Obituary) after which it saw release through Haftvad Records, the label issuing, “With razor-sharp metallic riffs, pure punk adrenaline, and an original Sword and Sorcery theme, HIGH COMMAND delivers a demo of skull crushing fantasy violence and aggressive atmosphere. If the brutal literary worlds of Robert E. Howard and Karl Edward Wagner manifested in the musical form of Sodom, Mercyful Fate, Integrity, and Cro-Mags, The Secartha Demos would likely be the result. For those who live for the lust of battle and music that bludgeons with the fury of a spiked-mace.” The label then issued the two-song The Primordial Void 7″ shortly after.
Decibel Magazine called the band, “A brawny and narrative-driven kind of crossover, draped in outlandish lore, taking zero prisoners,” and No Clean Singing offered, “It’s a powerhouse dose of crossover thrash that’s thoroughly galvanizing when the pedal is to the metal, and hits hard enough to rupture organs in the mercilessly grim slower sections.”
For coverage of HIGH COMMAND in The Americas contact dave@earsplitcompoud.com and elsewhere contact lauren@rarelyunable.com.
https://highcommand.bandcamp.com
https://www.facebook.com/HighCommand
http://www.southernlord.com
http://southernlord.bandcamp.com
http://twitter.com/twatterlord
https://www.facebook.com/SLadmin
https://www.instagram.com/southernlordrecords