EAGLE TWIN: The Thundering Heard (Songs Of Hoof And Horn) Streaming At Noisey; Album Out Friday Through Southern Lord 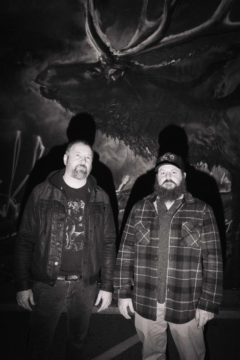 Salt Lake City duo EAGLE TWIN presents their anxiously-awaited third LP, The Thundering Heard (Songs Of Hoof And Horn), out this week through Southern Lord. The full album can now be heard ahead of the record’s release through Noisey, alongside an interview with both members of the band.
EAGLE TWIN‘s commanding sound delivers like an Earthly force, where doom and blues collide. Gentry Densley’s dominating low-end vocal tone bellowing alongside some of the most dominating riffs he’s ever poured forth, and Tyler Smith’s powerful rhythmic propulsion erupting like tectonic shifts and molten geysers. Fueled with the band’s jazz and blues influence, the creative ongoing storyline between LP’s, and an overall singular and commanding tone, all elements align into an unstoppable album.
Noisey’s interrogations with Densley and Smith includes, “the music is viscerally accessible, and deeply cathartic. It’s tempting to associate the record with the chaotic present day, but the record had essentially already been recorded as long as two years ago. And ‘Heavy Hoof,’ the record’s menacing, lurching third track, was the first song the duo wrote together after forming EAGLE TWIN in 2006.”
Unleash The Thundering Heard at Noisey RIGHT HERE.
Southern Lord will release The Thundering Heard on LP, CD, and digital formats on March 30th; find physical preorders HERE and digital at Bandcamp HERE.
Stand by for additional previews, tour dates, and more on EAGLE TWIN to be announced shortly.
Equally prevailing are the stories that shape EAGLE TWIN‘s musical output, drawing upon folklore, and also strongly informed by recent happenings in the world. Observing our relationship to nature, and the band’s own surroundings in the dead salt seas of Utah are themes that feature frequently across their musical canon. The Thundering Heard continues where the previous album The Feather Tipped The Serpent’s Scale ended. In the band’s own words, “As the great snake grew giant fractal antlers of snakes and turned in upon itself creating a new world, the mountains rise, and the antlers stab through like trees across the landscape. The record begins with the hoofed and horned animals of our world running from mountains and forests on fire. Eerily harkening to the recent events in California and the massive devastation by fire across the land.”
For review copies of The Thundering Heard and interviews with EAGLE TWIN contact dave@earsplitcompound.com; and in Europe/UK contact lauren@rarelyunable.com.
https://eagletwin.com
https://www.facebook.com/eagletwinmusic
https://www.instagram.com/eagletwinmusic
http://www.southernlord.com
http://southernlord.bandcamp.com
https://www.facebook.com/SLadmin
http://twitter.com/twatterlord