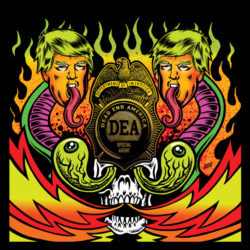 Crush The Machine was recorded at House Of Tain in Milwaukee, Oregon, The Magic Closet in Stayton, Oregon, and Mondo Generator Studios in Salton Sea, California. Mike IX’s vocals on “Bullet for 45 (Straight From A .45)” were recorded by Sanford Parker at Hypercube in Chicago, Illinois, and Blaine Cook’s vocals on “Searching For A Reason” were recorded at RGP in Portland, Oregon. The tracks were mixed by Mr. Ian Watts at The Magic Closet and mastered by Nick Townsend at Townsend Mastering, and the EP completed with cover art by Dirty Donny and layout by Emma Maatman.

Tony Avila states, “Steve was very special to all of us, whether it be his skills on the drum set, producing, or just hanging out with the guy, you couldn’t go wrong. It was always a good time. We are all going to miss him very much. Thankfully, we were able to get this going before he passed, and I can’t think of a better tribute to him than this. Beyond stoked to be able to work with him and the rest of the guys on this record. I think Steve would be happy and that’s the most important part. Cheers.”

Crush The Machine is out now digitally, with the 7″ vinyl to follow. Find physical preorder options at the label webshop HERE and the digital at all DSP’s including Bandcamp HERE, iTunes HERE, Spotify HERE, and Apple Music HERE.

Review copies of DEAD END AMERICA’s Crush The Machine are available. For interviews and coverage of the band in The Americas contact dave@earsplitcompound.com and in Europe contact lauren@rarelyunable.com.