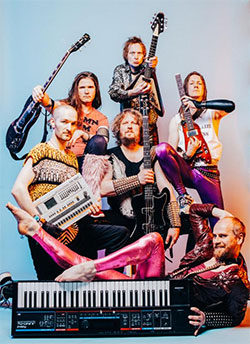 CIRCLE is the very definition of genre-defying; a rare feat for any band, but effortlessly achieved by this prolific Finnish collective. CIRCLE’s latest album Terminal, confirmed for release June 23rd through Southern Lord, is pure hedonistic pleasure.

Never content on staying the same, CIRCLE has created an idiosyncratic cocktail of sonic fusions, conjuring an impulsive, dizzying energy that stirs a spirit of curiosity within the listener, and possesses all who encounter the band. Whilst many would run out of creative steam after more than thirty albums, CIRCLE continue to boldly explore sonic soundscapes, venturing curiously into terrains of Stooges-esque swagger, trance-inducing kraut rock mantras, beautiful electronic ambience, psychedelic rock noodling, arena storming AOR weirdness, ’70s prog rock extravagance, glam pop pomp, and of course their core sound, heavy metal, not to mention other peculiar and daring sounds that simply cannot be pigeonholed.

The Terminal track “Kill City” has been posted; stream it now at THIS LOCATION.

CIRCLE’s Terminal is gloriously fruitful in tones, shapes, colors, and sounds. Eccentric, accessible, delightful and thrilling. Southern Lord will issue Terminal on June 23rd; preorders are live at the Southern Lord store and Southern Lord Europe, as well as at Bandcamp.

Review copies of Terminal will be issued in the coming days. For all coverage/interviews of CIRCLE in North and South America contact dave@earsplitcompound.com and in Europe and beyond contact lauren@rarelyunable.com.