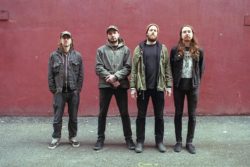 Revolver Magazine is now streaming Beacon Of Faith, the new album from Vancouver’s BAPTISTS, as the album surges towards its official release this Friday through Southern Lord.
The Beacon Of Faith album stream is paired with an interview with BAPTISTS on their crushing Kurt Ballou-produced third full-length release, in which Revolver declares, “Like previous records Bushcraftand Bloodmines, the band’s latest release excels in wickedly fast, battering-ram-to-the-face assaults (‘Absolved of Life/Spent Cells’, ‘Carbide’) that recall Converge (whose guitarist Kurt Ballou recorded and contributed to the album) and cult crust/hardcore crew Cursed. But the act is just as willing to mangle you with barbed-wire noise rock (‘Gift Taker’), or slowly eroding death marches (‘Eulogy Template’). It’s the most fully-realized and harrowing Baptists experience yet.’
Listen to BAPTISTS’ Beacon Of Faith at Revolver Magazine RIGHT HERE.
Southern Lord will issue Beacon Of Faith this Friday, May 25th; find preorder bundles – including reissues of the band’s prior albums, Bushcraft and Bloodmines – at the Southern Lord webshop HERE, and digital preorders at Bandcamp HERE.
Stay tuned for Baptists tour dates and more BAPTISTS news to be announced shortly.
Beacon Of Faith broadly follows the same trajectory as its predecessors — Bushcraft (2013) and Bloodmines (2014) — combining raw adrenaline-fueled emotion, venomous vocal delivery, gigantic guitar sound, and a visceral, rhythmic propulsion, a sonic manifestation of desolate rage, bolstered by a palpable sense of urgency. The album is densely-packed, yet BAPTISTS‘ sound is far from claustrophobic. There is melody amongst the dissonance, as the band more deeply explore the noise rock vistas that have always underpinned their sound.
The lyrics on Beacon Of Faith are drawn from the members’ direct experience of a broken society and general discontentment with everyday life. A multitude of issues are in the firing line, from the Canadian court system, issues surrounding substance abuse, mental health, and how the more fortunate tend to dismiss people who have been dealt a less-fortunate hand. Beacon Of Faith was recorded at Godcity in Salem, Massachusetts with Kurt Ballou in July 2017, mastered by Brad Boatright at Audiosiege in Portland, Oregon, and completed with photography by Jillian Mann.
For review copies of Beacon Of Faith and interviews with BAPTISTS in the Americas contact dave@earsplitcompound.com and otherwise contact lauren@rarelyunable.com.
http://baptists.bandcamp.com
http://www.facebook.com/pages/BAPTISTS/111676572202547
http://www.southernlord.com