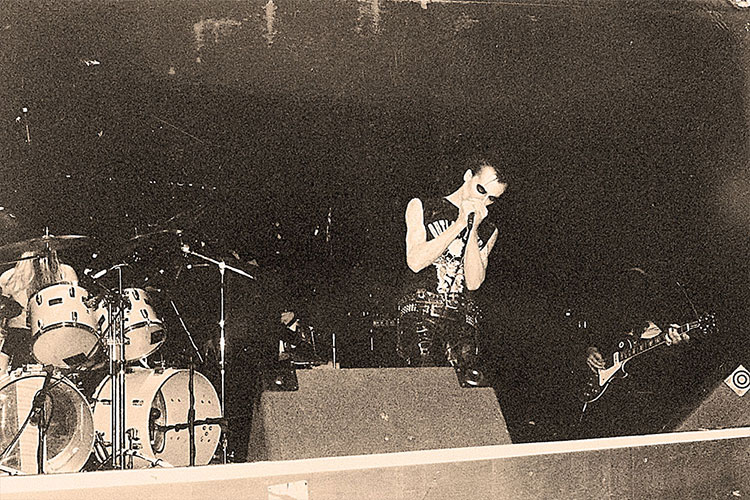 FORMATION:
After the breakup of the cult doom/death band Thorr’s Hammer in 1995, Stephen O’Malley, Greg Anderson and Jamie Sykes formed Burning Witch. The band then added G. Stuart Dahlquist and vocalist Edgy 59, rounding out their lineup. Anderson left the band and moved to Los Angeles to form the band Goatsnake. In 1996, the band (w/out Anderson) recorded songs with Steve Albini, which would become the Towers… EP. This collection would actually not see a formal release on 12″ until 1998 on Slap A Ham Records. After the sessions for these songs, Sykes left the band and was replaced by B.R.A.D.
The sessions that followed the Albini recordings resulted in the Rift.Canyon.Dreams EP, which would prove to be the final recordings by the band, as they broke up soon after the disc was completed. It was released on 12″ by Merciless Records.

DISINTEGRATION:
Shortly after disbanding: ” Crippled Lucifer” a compilation CD of the two EPs, was released in 1998 by the then new label Southern Lord Records. It was the second release of the label, the first being Thorrs’ Hammer. Burning Witch briefly reformed for their last shows in the fall of 1998 after which Edgy 59 left the band. O’Malley reunited with Anderson to form Sunn O))), and Dahlquist joined both in sunn 0))) for their first two albums (The Grimm Robe Demos øø Void) then briefly joined Anderson in Goatsnake for the “Flower of Disease” album. Currently, O’Malley is in various projects including Sunn O))), and KTL. Dahlquist and B.R.A.D are in Asva.

THE UNHOLY BIRTH OF A GENRE….
The sound, attitude and execution of Burning Witch is very slow, painful, and heavy. While the band was unabashed about their influences they effectively used these influences to create something unique for the time. Ultra-heavy, dark minimalist riffs, bombastic bass, and plodding war drums collided with vocals which alter between a nasal, melodic singing voice to a brutal, tortured demented scream/shriek. Burning Witch were truly the first band to incorporate the dark atmosphere of Black Metal with tortured doom-metal. Their influence is worn on the sleeves of many bands these days including: Graves At Sea, Goatsblood, Middian (YOB), Isis.